The following feature story was published in the Fall 2017 issue of “UGAzine.” The audio clip was produced in order to supplement the written story. It was produced for “Multiplatform Story Production” during my senior year.

Jimmy Johns: A Dad Who Dreamed Bigger
By Marlee Middlebrooks

“One day, I came home. It was hot, I was hurting, and I didn’t make any money. It was just a bad day at work. My little boy at the time was four, and he came up to me and said, ‘Daddy, when I grow up, I want to be a mechanic just like you.’ On the one hand, I was really excited to hear that, but on the other hand, I thought about my son at age 40 years old, hurting every day. If [being a mechanic] was what he wanted to do, then that’s awesome, but I didn’t want him to feel like that was the only option. When you combine the fact that I wanted to do something else anyway and the fact that it’s more effective to show how important something is than to just say how important something is, that’s what really pushed me to go for “it,” says Jimmy Johns.

Johns is going for it. He decided at age 40 to pursue earning a Bachelor of Science degree in Mechanical Engineering from the University of Georgia. Now, he’s a sophomore mechanical engineering major, but previously, he spent nearly 20 years as a mechanic in the Athens area. 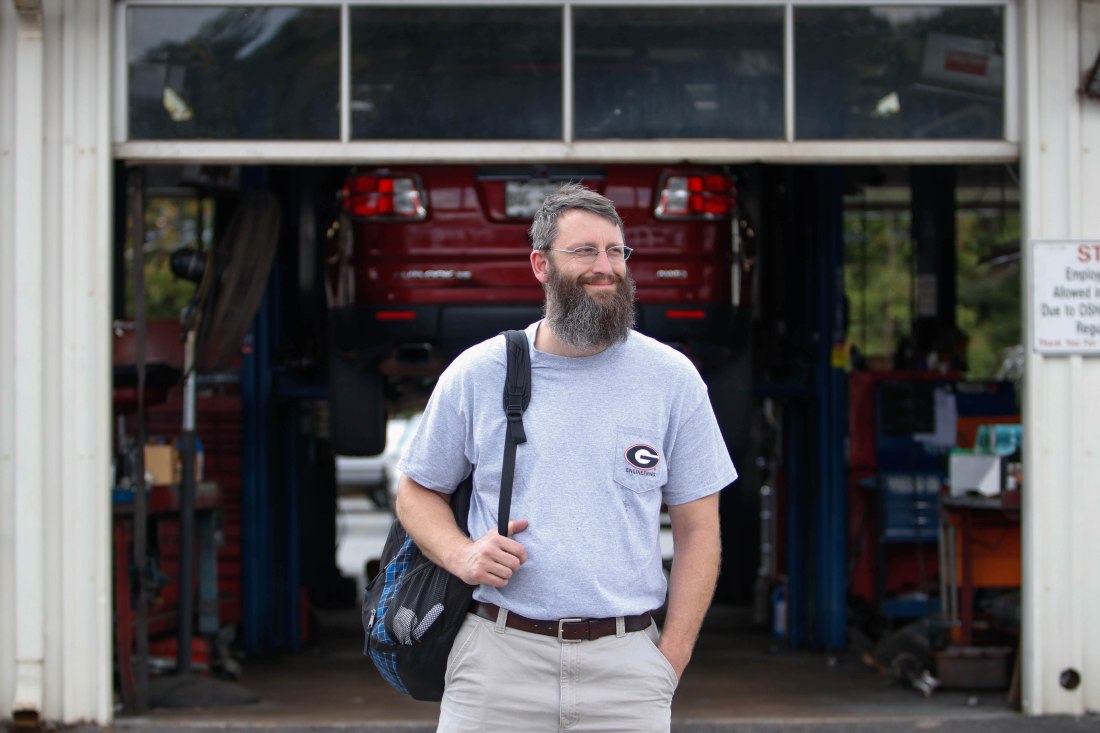 Johns graduated from high school in 1988 in Savannah, but unlike several of his fellow bulldogs who transitioned quickly and eagerly into the next stage of schooling, he “really didn’t want to finish high school.” “Really, I finished just because I didn’t want to struggle with having to try to find a job without a high school diploma. I went to work with no intention of ever going back to college,” says Johns.

He started working at a car dealership only one day after receiving his diploma, and 11 months later, he returned to his hometown of Athens where he got a job at Hayward Allen Motor Company in March of 1996. Johns retired from the same company in June 2016.

“The first five to 10 years of being a mechanic, I really enjoyed it. You’re doing a hobby for a living. The type of person who becomes a mechanic enjoys working with his hands. After about 10 years, it gets a little repetitive. After about 15 years, you start noticing that you hurt getting up in the morning because every day you’re doing something physical and that wears your body down,” says Johns.

He also began to consider the financial trajectory of his career as a mechanic. According to Johns, in the beginning, you can earn money quickly, but eventually your pay “plateaus” because you max out your skills and efficiency. In addition to the physical tolls his job was taking on him, Johns says it was concerns like these that “made me wish I would have gone back and done something differently.”

For Johns, one person who knew that he could do something differently was Rod Johnson, a master technician at Hayward Allen Motor Company from Athens. Johnson and Johns have worked alongside one another since 2001. “I started here when I as 18, and he basically taught me everything,” says Johnson.

“I was always curious why [Johns] never went to college. He kept talking about it on and off. It just seemed like there was a lot more out there for him. He finally brought it up one day that he was thinking about it. I was like, ‘Man, you really need to pursue it because you’re too smart for this,’” says Johnson. “He’s a very special guy, and he’s one of my best friends.”

Even though Johns has been attending UGA, he still has been going to college in a “non-traditional” manner. Typically, he has been taking a semester of classes and then doing a paid internship for a semester in the field which he aspires to have his next career in, mechanical engineering.

“I’m having to ‘play hop scotch’ between school and internships because I have a house I have to pay for,” says Johns. “In January, I’m going to John Deere for my third internship. It’s been very stressful because I was the one who paid the bills, and now [my wife] is having to, so there’s sacrifices being made. That part is tough.”

Several aspects of Johns’ college experience will be unique from many of his counterparts, especially the few times that he has been able to bring his son with him to class. Because his wife works, and he is a full-time student during certain semesters, on holidays, he pre-arranged with his professors to bring his son to class with him.

“It was unique. I ended up talking a little bit to his son and more to Jimmy [Johns] about it. His son tried to take notes and all, pretty cute and very well behaved,” says Peter Carnell, lecturer in fundamental engineering courses at UGA. “Jimmy told me that part of all of this for him was that he wanted to be a model—his son is looking to him.”

Ultimately, Johns hopes that once he can complete college, and this chapter of his life ends, there will be a new career journey on the horizon. He says it is not his desire to be a mechanic again. Instead, he would like to design the systems that he once repaired.

“After putting all this money out for a degree, I definitely want a better job than the one that I had before—that would be the easy answer,” says Johns. “The other thing is…I would like for my son to see the lesson. I wouldn’t want the struggle of going to school at my age, with a son,…I wouldn’t want that to be something that puts him off, something that makes him angry. I really would like for him to see that it is important. The education itself is not as important as the doors that it will open.”

The following audio segment particularly highlights Johns’ experience as a nontraditional student applying and getting accepted into UGA.